MEEK MILLS-SURVIVAL OF THE FITTEST

Yo, I want to say what’s up to all my writing friends, blog Divas, blog homies and of course to all my mega maniacs from all over the map in the good old USA and to my people from across the pond, the UK and beyond. I decided to write these blogs for everyone to enjoy them and I also have fun writing them as well. Thanks for checking me out and please check out my videos on IGTV if you want to get started writing on your own. I have some very good tips to get you flowing don’t wait to get started on your dreams today!

Now check this out I was watching the Meek Mill’s documentary on Amazon Prime and I have to tell you it brought me to tears, my son did not want to say it but I manned up and said it because we both went through the same things that happen to Meek Mill. Millions of us from the hood knows how he feels all the injustice, police corruption and every day impoverished despair we see on a daily basis because we come from where he came from Philly and all around this country. I myself come from the slums of South Philly and making it out is so hard people just don’t know all your hopes and dreams can be snuffed out in just a split second of your life and you don’t have to be doing anything wrong just being the wrong color.

I had to watch it two times it was so moving and powerful it was a soul stirring experience just like when I watch When They See Us on Netflix it stays with you for the rest of your life. Robert Rihmeek Williams aka Meek Mill I first heard of him when I was bootlegging CD's and DVDs hustling, deejayING, working a BS job to make ends meet all at the same time when Flamers his mix tape came out. This kid had a tremendous work epic back then. I used to tell all the young guys I was trying to produce hip hop records with rapping all the time how good this young guy hustle is and y’all need to do the same thing. Well as you know that went in one ear and out the other. While he was killing the game, little did we know or the rest of the world what he would become. I seen it each time he dropped something he lit the game up in Philly and with all that hard work he put in it paid off for him in the end. He was in a group that did not last long call the Bloodhoundz in 2008, then Atlanta-based rapper T.I. signed Meek to his first record deal in February 2011, after that I knew he was going to take off it was no stopping this kid. I knew he had the heart and the drive to make it to the top when I saw Meek Mill’s Hustle game was on steroids it reminded me of the rise of 50 Cent phenomenon.

What people who don’t know anybody from Philly is just a born hustler Illegal or legal they just out work people from the door I know this from my personal experience I was born and raised in Philly it’s in the water, I guess. Then after leaving Grand Hustle Records this is when he really blew up. Meek Mill and Rick Ross came to Philly for a show and found out he was the hottest cat in the city was Meek Mill. Rick Ross was getting an on slot of Twitter and Facebook followers letting Rick Ross the boss know what time it was with Meek Mill.

He’s super-hot and his music is blowing up on every block. This let Rick Ross know that he needs to sign this dude who have the city on lock none stop. So, the street-smart entrepreneur Rick Ross let his next move be his best move he signed Meek Mill to his Miami -based Maybach Music Group (MMG). Meek Mill’s debut album Dreams and Nightmares was released in 2012 and to me it was like napalm on the hip-hop game once it dropped and it kept getting hotter. And just like the astute hustler Meek Mill’s is he launch his own label imprint Dream Chasers Records. He named is label after his sweltering hot mixtape series he had on the streets killing the game. Just like I said in the beginning of this blog Philly Cats hustle hard before it was a concept people always saying out their mouth. But Meek Mill is also a team player often collaborating with his fellow MMG’s label mates lacing up all the real hip-hop fiends with their fix dope music. Ima Boss is my favorite and one of my theme songs when I’m making moves for real. Then he dropped, Dreams Worth More Than Money his second big contribution to the game that really needed his lyrical mastery from the door. To me just the title alone is a very powerful statement to everyone out there struggling in the day to day life in hell of the ghetto not to give up on your dreams. Well that’s how I took it because that’s a really deep thing to name your album that I would love to ask him one day.

By 2016, his third hip hop masterpiece was called Wins & Losses to me he was pouring out his soul to the world showing his vulnerability his own truth from out his mouth and his strength. To show the whole world even with the some of the so-called wins and Losses I’m still here and I’m going to make it and so can you after you done slipped or fell. His fourth album a block buster from the door Championships was released in November 2018 and it debuted at number one on the Billboard 200. He came a long way from his hustling his mix tapes to every store and bodega in the hood. This is a major accomplishment, but it did not stop his hunger to be one of the elite rappers in the game.

I’m old enough to remember his uncle Grand master Nell in the late 1980’s one of the Philly legends despite having that hip-hop DNA inside of him you can contribute all of Meek Mill’s success to his own hard work epic. He never gave up on his dreams of making it in the game even with a very corrupt black woman judge who wanted him under her thumb. The dirty cops who lied from the door making him spend all that time in jail for nothing just because he was poor and black, and he still came out on top. Just think of the millions of people who did not make it out of the cesspool of a system in Philadelphia. And all over the country that’s set up for black, brown and poor white people in the belly of the beast millions every day is swallowed up like a giant whale. It is far to many of us people of color is subjected to this systematic abused and programmed to fail and get railroaded straight to jail.

Well it’s your boy Dartanya A. Williams Sr the underground novelist super star aka Deeluciano the Don everyday I’m writing super-hot content and dropping bombs! If you like what I dropped on your dome, please drop me a line on the many social media do dads I’m on. I’m on Twitter @Dartanyasr. My Facebook author page Dartanya A. Williams Sr. and I’m on Instagram Dartanyasr. And my banging ass website Dartanyaawilliamssr.com.

Hey and don’t forget to pick up my super-hot street masterpiece Almasi aka Glock Mommy once you start reading it you will not want to put it down that’s real not any hype check it out for yourself and see! 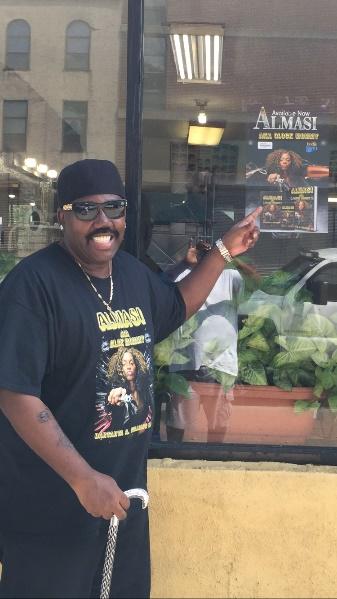